In this article I will give a bit extra information about the Arcana Radio Location Device I build in the beginning of this year. Since I am a radio engineer, the challenge to build this device is rather limited. The sounder electronics is built in a very simple way, with all standard components. Just look into an electronics component stock and you have all the parts to build the electronics circuits. The most challenging part is, to my opinion, the construction of the self induction coils.
In the article http://sc-cascade.blogspot.com/2011/02/project-arcana.html I have posted a few words about the construction of the device, and I have seen in the blog statistics, this is the article with most hits! So a lot of cavers seem to be interested in these devises.
The actual use of this device was to measure out a possible passage way between two rooms in the 'Grotte de la Fosse aux Ours' at Rochefort(B), a cave we explore since 2008.
The nice thing about the Arcana system layout is the use of compact self's, in stead of the large air self’s often used in other radio location devices. Since we use both the transmitter and receiver in the cave, compacts antennas are preferred to make transport and setup of the system easier.
On the internet you can find several references about the original build of the system, and also about some changes in electronics and add-on’s.
http://speleo19.free.fr/arcana/contributions_arcana.htm
http://www.caves.org/section/commelect/splncs/splncs26.pdf
So I build the original electronics layout for transmitter and receiver. The first problem I had was to find the necessary ferrite rods to put into the core of both the transmitter and the receiver antenna coils. On e-bay I found a Russian surplus was sold at 28€ for 16 piece of ferrite rods 10x200mm, so just what I needed. Since the very low frequency of operation of the transmitter (<1000Hz), these ferrites of type M400HH, originally build for LW radio's should do fine.
Since I could not find a tube with a correct interior diameter, I simply split a plastic tube (a bit to small to fit the 7 ferrite rods) over the whole length, and then the 7 rods shifted well into the tube, and at the same time the tubes presses the 7 rods well into place. The transmitter coil got then the 4 layers of 250 turns, 0.84mm wire. In-between each layer I inserted a plastic sheet; this makes it easier to get the coil well wound. Finally I had 1016 turns on the transmitter coil, and I measured it to have self induction of 102mH and 4.5ohms resistance, just as I expected.
In the same way the receiver self induction coil was made out of 7 layers and about 7000 turns in total of 0.2mm wire. The resistance is 542ohms and the self induction is >1Henry.
During testing I used a small ferrite receiver antenna, and found out this baby antenna performed also very well at short distances. It is a ferrite rod of only 10cm long, and about 200 turns. Simply hold the receiver antenna near a radio or hifi speaker, and you get an idea of the sensitivity of the receiver antenna. (put the radio on hé;-)
During testing I found out I had to change the operating frequency a bit, so the transmitter antenna is into resonance at about 715Hz. The current drawn of the batteries is than rather high at about 500mA, and the voltage over the resonance capacitors of 0.22uF got well over 400V, so I simply tuned the oscillator a bit off resonance. The current consumption drops and the voltage over the capacitors is also on the save side. Now the transmitter power is not at the maximum, but I did not need this for my project. So be aware to put in capacitors of 600V or even higher!! And also be careful about the high voltage, and at the same time a high acoustic level the transmitter coil produces!
Making the device ruggedized:
Originally I planned to construct the transmitter unit as an al in one tube unit, but finally I left the transmitter electronics, antenna, and batteries as separated units, and this seems easy to transport and setup. The receiver is build into one small box, and only needs the external antenna and earphone units to be attached.
Using the equipment:
In the cave we had about 10 meters between transmitter and receiver, so I only used the small receiver antenna. Making a horizontal measurement in-between two rooms, separated with about 7 meters of rock, this is a more difficult measurement (equipment is mostly used to measure vertical positions). But after we finished the tunnel in-between the two rooms, the results of the Arcana sounder seemed to be very accurate.
Gepost door Geert om 10:37 Geen opmerkingen: 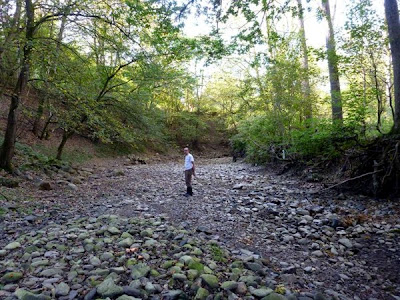